Created in the High-Tech Supplemet Laboratory for truly effective fat burning performance. A mega fat burner with incredible power! Synephrine destroys body fat with maximum killer instinct! SYN-30 is a grease killer or fat killer in a class of its own! For bodybuilding this is optimal to see a training success. SNS SYN-30 Synephrine HCL is a dietary supplement (also called dietary supplement). In order to see the optimal training success, you can not do without a balanced and on you adjusted nutrition. Proteins, protein, carbohydrates and fats should be included in your daily diet.

SYN-30 is a natural, potent fat burner that mobilizes body fat and stimulates the metabolism. SYN-30 is loaded with 30 mg Synephrine HCL, which comes from the bitter orange fruit that has been used for centuries in eastern medicine. Synephrine acts as a powerful metabolism booster that mobilizes stubborn body fat areas and increases metabolic rate so you burn more calories. With SYN-30 you can say goodbye to “problem areas” such as thighs, buttocks and abdomen, as the fat stores in these areas are transported away for burning. In addition, Synephrine also controls your appetite, which means you do not have to waste your precious mental energy fighting the cravings. In addition, SYN-30 has a mild stimulating effect, so you will experience clean feel-good energy throughout the day. Losing weight is a really hard job – with SYN-30 it’s not only easier to lose weight, it also makes you feel more energetic and energetic. If you have been looking for an increase in your weight loss, look no further! Order your SNS SYN-30 bottle today and see how your fat melts!

Consume 1 capsule SNS SYN-30 Synephrine HCl in the morning and 2 more capsules in the afternoon.

SNS SYN-30 Synephrine HCl uses only natural vegetable capsules that are free of any animal products! 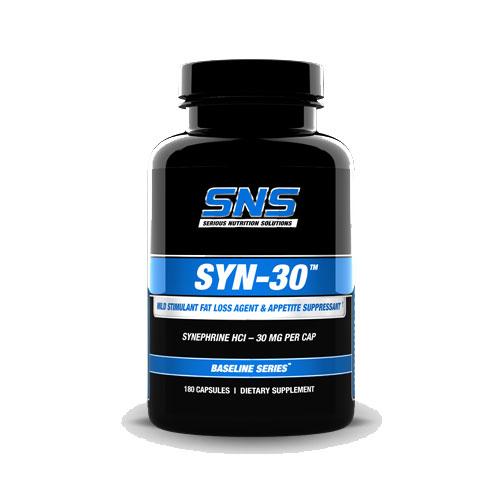 There are no reviews yet.

Show reviews in all languages (2)